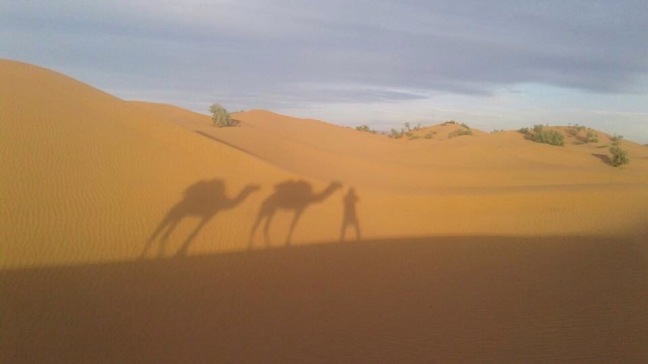 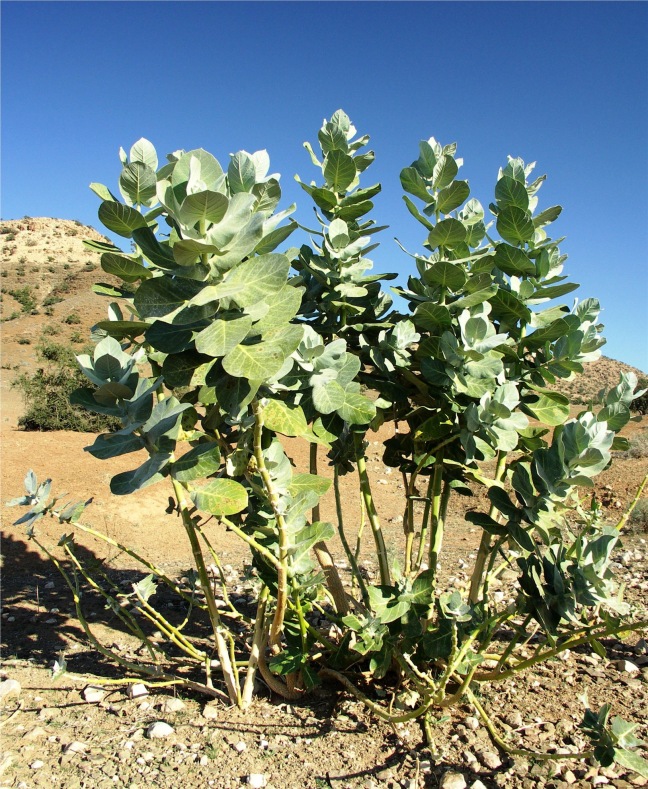 This impressive looking plant is the giant Milkweed, Calotropis procera, a species of flowering plant that is native to North Africa and parts of Asia.
My first encounter with the giant milkweed occurred when I commented about the many floating seeds that drifted past as we ambled across the Hamada with the camels one November morning. Barbossa took a stick and poked what looked like a large green fruit on a nearby tree, it collapsed with a sigh and I could see it was actually completely hollow. This, he said, was where the seeds were coming from, and that it was a poison tree, the milk (sap) could make people and animals blind if it entered the eye and no animal would eat it. 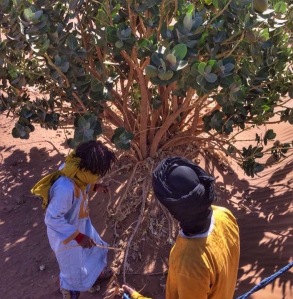 You may well encounter this curious plant as you travel across the Sahara, in some areas it is ubiquitous. Common names for the plant include Sodom’s Apple and Kapok tree. At times the breeze is filled with their small floating seeds like desert snow.

Inside the green globes is a toxic milky sap that is extremely bitter and turns into a gluey coating resistant to soap. Most animals will not eat them due to this toxic sap which can cause rash, blisters and serious inflammations and may as mentioned above, lead to blindness. Ingesting larger doses of latex produce toxic symptoms like burning in the throat, irritation of the stomach, nausea, vomiting, diarrhoea, tremors, vertigo and convulsions.

Sheep, goats and camels will sometimes try to eat the young leaves, young pods and flowers during droughts, but only if they are very hungry indeed….Even the nectar of the flowers is considered toxic, and gives honey a bad taste. Beekeepers therefore often cut down the plants near to their hives.

But even this seemingly hostile plant has amazing uses

All over Africa there are medicinal uses of Calotropis procera Roots, stem bark, latex, leaves and flowers are all used in many and varied ways in traditional medicine.
A decoction or infusion of the stem bark and root bark, or the powdered bark in water is taken to cure diarrhoea, dysentery, intestinal worms, colic, spleen complaints, stomach-ache, cardiovascular problems, pneumonia, fever, jaundice, elephantiasis and leprosy.
Dried root powder in water is taken to increase milk flow of nursing mothers and is given to women to ease child birth. Ground roots or the ash of the burnt roots are applied as a salve or rubbed in to treat skin rash and skin infections.

Root powder mixed with Capsicum pepper is put in a bath to treat rheumatism and arthritis. The root bark with latex is smoked as remedy for cough. The stem bark is even considered in some countries as an aphrodisiac. The latex is also used as an antiseptic, Leaf juice is used as a poison antidote, rubbed on scorpion stings and wounds, leaf pulp is taken to treat snakebites. A leaf decoction or infusion is drunk to treat colds, Pounded fresh leaves are put under the pillow to treat insomnia.
Leaves are used as mattress stuffing to keep insects away. Dried leaf powder is sprinkled on wounds to improve healing and burnt ground leaves effectively reduce pain and swellings in rheumatic joints. Leaves are heated, grated, mixed with fat and applied as a paste to treat skin diseases and lice. A leaf dressing is applied to the abdomen to ease childbirth and to treat sun stroke. The smoke of dried, burned leaves, and sometimes the stems, is inhaled to calm asthma attacks and severe headache.
A decoction of the dried flowers can even be drunk to treat impotence apparently!
And of course the woody stems can be used for firewood in an environment where it is often scarce.
There is one creature which does enjoy the leaves of the milkweed and that is the beautiful and rather misnamed plain Tiger or African Monarch butterfly, which is believed to be the first butterfly ever used in Art. A 3500 year old Egyptian fresco in Luxor features the oldest illustration of this species

The plain tiger is protected from attacks due to the toxic latex eaten by the caterpillars during the larval stages. The butterfly therefore flies slowly and leisurely, generally close to the ground and in a straight line. This gives a would-be predator ample time to recognise and avoid attacking it. Inexperienced predators will try attacking it, but will learn soon enough to avoid this butterfly as the alkaloids in its body cause vomiting.

The butterfly also has a tough, leathery skin to survive such occasional attacks. When attacked it fakes death and oozes nauseating liquid which makes it smell and taste terrible. This encourages the predator to release the butterfly quickly. The plain tiger thus has the ability to recover “miraculously” from predator attacks that would kill most other butterflies.